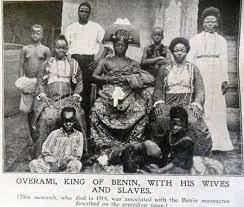 First of all a short history lesson.

The Benin Bronzes are a collection of ornamental bronze plaques and sculptures from the Edo people in what is today Nigeria. They were taken from Benin by the British Army during the Benin Expedition in 1897 and are today cared for in the British Museum. They led to a greater appreciation of traditional African art and culture and have been extensively studied by experts as well as viewed by many thousands of museum visitors.

The Benin Expedition was a nasty affair. In 1897 a Benin strike force brutally attacked and killed the members of an official British trade expedition. Up to that point, Britain had left Benin alone and tried to peacefully trade with it, but the ruler of Benin would have none of it and tried to make life difficult for the British in a number of ways, culminating in the murderous attack on the British party which was unarmed at the time.

We had some balls back then and sure enough a punitive expedition was dispatched to Benin to teach the ghastly woligogs a lesson.

When they arrived (the King of Benin having run away) they found the signs of a truly brutal, savage and nasty culture. There were scenes of human sacrifice where the captured African slaves of the Benin people had been ritually murdered. There were pits filled with dead bodies. There were sacrificial trees with decomposing and often headless bodies nailed to them.

These things were not made up. They were well attested by many observers, including Sir Richard Burton. The British tidied things up, obviously feeling no respect for this despicable culture, and shipped the Bronzes to England where the majority of them were preserved and cared for. Some were taken by army officers and sold into private collections.

As writer Elspeth Huxley wrote in her 1954 book on the massacre – ” … It is a story that still has power to amaze and horrify, as well as to remind us that the British had motives for pushing into Africa other than the intention to exploit the natives and glorify themselves.

Here, for instance, are some extracts from the diary of a surgeon who took part in the expedition.:- ‘As we neared Benin City we passed several human sacrifices, live women slaves gagged and pegged on their backs to the ground, the abdominal wall being cut in the form of a cross, and the uninjured gut hanging out.

These poor women were allowed to die like this in the sun. Men slaves, with their hands tied at the back and feet lashed together, also gagged, were lying about. As we neared the city, sacrificed human beings were lying in the path and bush—even in the king’s compound the sight and stench of them was awful. Dead and mutilated bodies were everywhere — by God! May I never see such sights again! . . .’

Fast forward 120 years and along comes Hicks, with his book “The Brutish Museums: The Benin Bronzes, Colonial Violence and Cultural Restitution”. Yes he really does say the “Brutish Museum”. He ridicules the British story of the massacre and the unsavoury practices of the Benin people.

To Hicks there is only one savage and aggressive party in the affair and that’s the British. The ‘atrocity” was the looting of the Benin Bronzes from the peaceful, loving kind people of Benin. They should be resituated immediately as a debt of colonialism. Museums, Hicks makes clear, are culturally aggressive institutions and insult to dark keys and the colonised.

What a load of morally indignant virtue signalling woke nonsense.

If it hadn’t been for the British many artistic treasures, such as these bronzes and the Elgin Marbles, would have rotted away in the heat or would have been used to build shacks and lean-to’s for the lazy natives to sleep in all day. It’s the tone of this book which annoys me as much as the flawed thesis.

The truth is closer to Conrad’s Heart of Darkness – they were terrifying cannibals not worthy of respect.

And then there’s this from Ron Knee

Well, the ignoble art of grassing up somebody has been practised since Judas dobbed The Man in for thirty pieces of silver. There’s always been a plentiful supply of those only too willing to act as a stool pigeon for the Inquisition or the Gestapo of the day.

The equally unsavoury bedfellow to these blackguards can be found in the ‘offence archaeologist’; namely, the childish but sinister cunt who slavishly trawls through the past actions and statements of others with the specific intention of finding something, anything, which can then be used to discredit them, usually in pursuit of some agenda.

Naturally enough, low-life practitioners of this activity are in their element in the age of wokery, policing soshul meeja for any past indiscretion which can then be thrown in the face of anyone deemed to have offended their doctrinaire world view.

The latest victim of offence archaeologists is England’s debutant fast bowler Ollie Robinson, who’s being hounded by an agent of the Thought Police for some immature remarks he tweeted nearly a decade ago.

Some priggish do-gooder with too much time on their hands took it upon themself to deem his comments ‘racist’ and ‘sexist’ (sadly for said archaeologist, it seems that Robinson hasn’t said anything which could be labelled homophobic or transphobic as well).

Naturally, the arseaeologist in question made sure that the comments were revealed just hours before the lad’s Test Match debut. Of course, Robinson had to make the now ritual grovelling apology; ‘my actions were inexcusable, I’ve now matured and fully regret the tweets’ etc etc.

My, how vindicated and sanctimonious the finger-pointer must feel, having ruined the lad’s big day and left him open to possible sanctions.

In days gone by, these offence takers would have been storming about carrying pitchforks and blazing torches, demanding that women accused of witchcraft be burned at the stake. Nowadays the woke mob gets its vindictive pleasure by trying to have those who have offended the prevailing orthodoxy roasted on the bonfire of public opinion.

Now all of this might not be so bad if the aim was genuinely to make life better, but we all know what this is really about. It’s about poker-up-the arse social justice warriors signalling their own virtue, while at the same time, taking perverse pleasure in being part of a mob witch hunt. Ironically, it never seems to occur to these twats that the majority of people regard them as arseholes.

As Robbie Burns might have put it, ‘a cunt’s a cunt for a’ that’.

64 thoughts on “Professor Dan Hicks and the Benin Bronzes”