Been plagued for years in this fucking PC world by cunts next to other cunts doing the old sign language hand jive for cunts that cannot hear. Theatre performances, kinema shows, fucking BBC news – you name it and there is some self important tosser distracting and ruining one’s viewing pleasure. If you are Mutt and Jeff every sympathy old cock but do fuck orf and read about it later.

Only look on the bright side delicious news that the signing cunt during the snuff of Mandela celebrations was a total fake. Deaf cunts had not a clue what was going on. PC police now trying to find out who the fuck the tosser was. Hero in my book blagging it to earn a few quid. Him excepted, signers are air wanking cunts.

Came across this shower of self righteous smug hateful cunts during the never ending Mandela bore-a-thon on TV.

Have you ever read such fucking pretentious shite in your life. Worst of the lot of them though is the toe curlingly annoying up her own arse cunt, Mary Robinson.

FFS! You have to be joking! Just who are these self righteous up their own arse cunts anyway?

Who else for the cuntroll? Martti Ahtisaari former president of Finland and winner of the nobel Peace Prize for bullshit, Ela Bhatt founder of the Self-Employed Women’s Association in India, Lakhdar Brahimi a former Algerian freedom fighter (another fucking peacemaker with a gun?), Gro Harlem Brundtland the first woman Prime Minister of Norway, Fernando H Cardoso the former President of Brazil (famous for reducing poverty apparently. Have you been to Brazil lately?), Jimmy the peanut king Carter, Hina Jilani a human rights lawyer (FFS! No!), Graça Machel another fucking human rights ‘champion’, Mary Robinson a ‘forceful advocate for womens participation in human dignity’ (whatever the fuck that means!), and last but not least Ernesto Zedillo a former President of Mexico ‘who led profound democratic and social reforms; economist and advocate of multilateralism, inclusive globalisation, nuclear non-proliferation and drug policy reform.’

Well spotted DanB. A right pretentious bunch of self appointed, self opinionated and self important cunts if ever there was one. I expect Blair will be joining now there’s a vacancy. Probably end up running it!

The Great Nelson Mandela Memorial Tribute in the FNB Stadium Soweto. Bit of a mouthful, so let’s just call it “Cuntfest 2013” to keep things simple.

According to some quality reporting in the Torygraph, 91 heads of state including Cameron (the Queen is our head of state you cunts!), Miliband and Clegg (duh!?), Hollande, Merkel, Obama, Mugabe, Tony Abbot, Jose Barrossa (the EU is not a fucking state!),King Willem Alexander of the Netherlands, Crown Prince Felipe and Prime Minister Mariano Rajoy of Spain, Dilma Rousseff, Mahmoud Abbas, Pranab Mukherjee.

And let’s not forget the really important people like Bono (obviously), Annie Lennox, Peter Gabriel, Bill Gates, half the Spice Girls (the other half had more sense), Oprah Winfrey, Naomi Campbell.

Yes, absolutely, together with many, many others this is indeed a positive cornucopia of cuntishness, a Cuntfest to end all Cuntfests!! A veritable cuntopia!

And how apt they are holding it in a football stadium – perhaps as a rehearsal for “Cuntfest 2014” which I gather is taking place in Brazil? 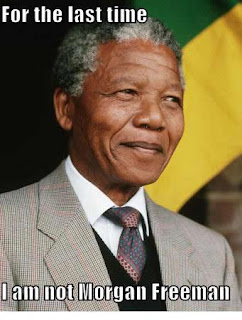